Want to Become a Member?

Information on our organization is now available online.

In August of 2006, with the ongoing intensity of the wars and with it the profound loss of human life, womenstanding began it's journey.  With my granddaughter, Gabrielle standing next to me, we began the visual of peace by holding white flowers in our hands.

Each Sunday afternoon for one hour, together we stood on the North 45th exit overpass in Seattle, quietly in respect, to honor the lives killed and for the intention of peace.

In late January of 2007,  the used black combat boots were added to our stand. Placing the flowers in one boot,  to be a constant reminder to all who viewed those boots with flowers, of the lives no longer here..

In gratitude and with a deep understanding of this mission, there are those who have been touched by the essence of this movement and have begun the journey,  carrying of boots with flowers.

We are to date a small group of individuals, standing alone on corners, overpasses, in front of Federal Bldgs, entrances to military bases, dedicating ourselves to presenting what we need most on this earth, peace... 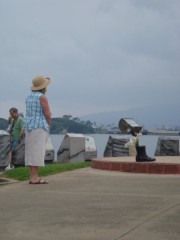